About Us
Governance
Home / About Us / Governance / ETFO Land Acknowledgements 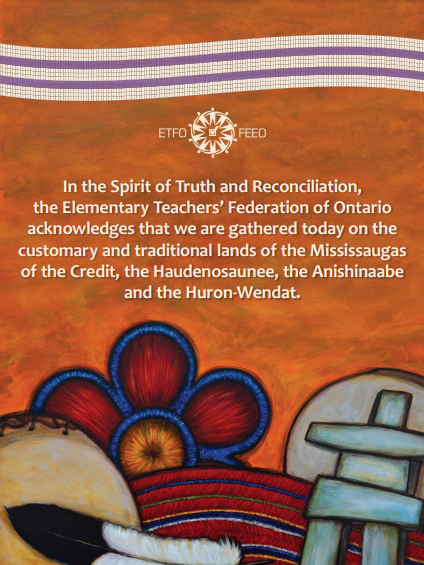 In the Spirit of Truth and Reconciliation, the Elementary Teachers’ Federation of Ontario acknowledges that we are gathered today on the customary and traditional lands of the Mississaugas of the Credit, the Haudenosaunee, the Anishinaabe and the Huron-Wendat. 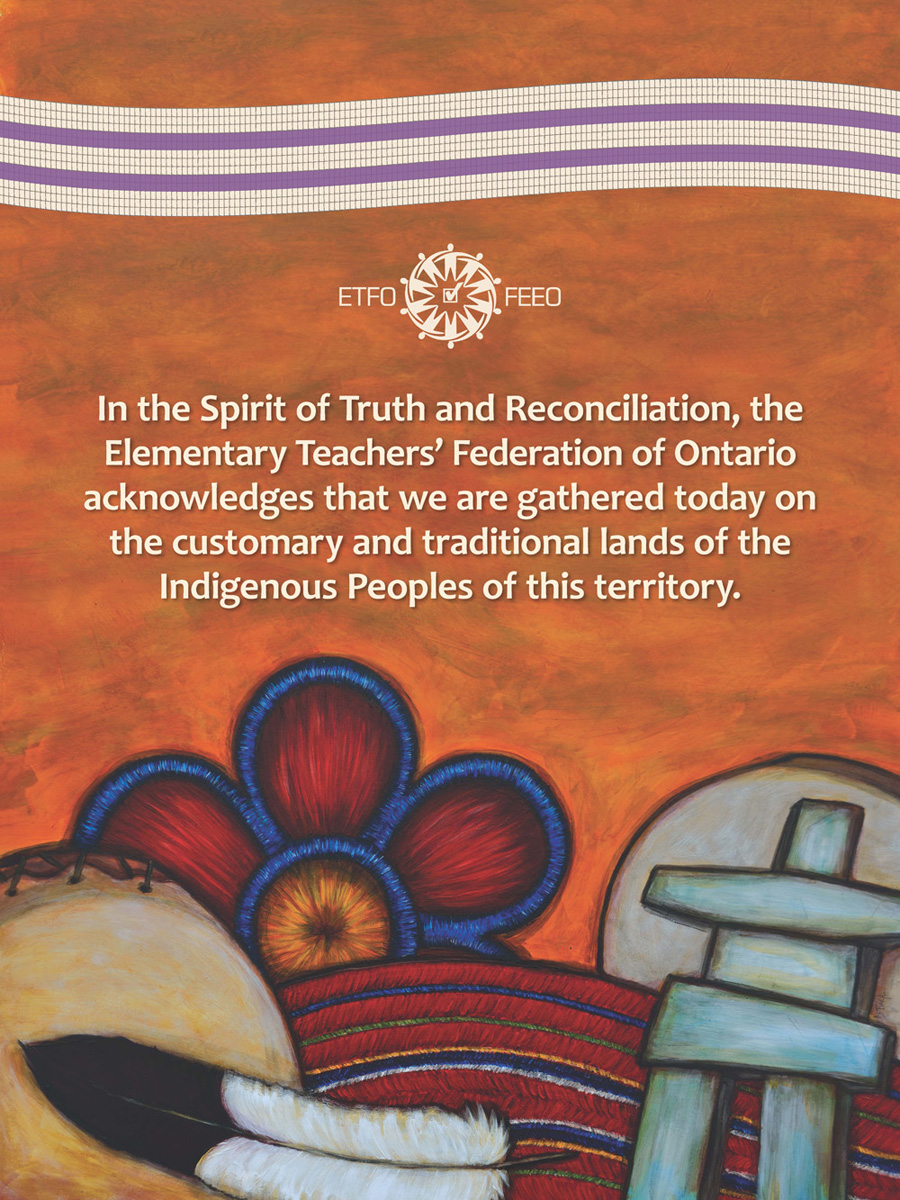 In the Spirit of Truth and Reconciliation, the Elementary Teachers’ Federation of Ontario acknowledges that we are gathered today on the customary and traditional lands of the Indigenous Peoples of this territory. 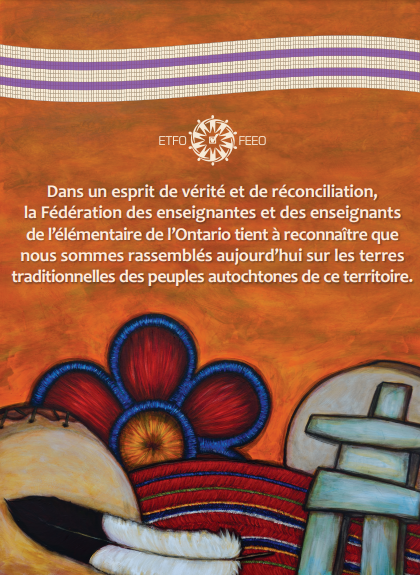 There are seven objects that have been purposely selected and included in the design of the artwork: an Inukshuk, an eagle feather, two drums, a Métis sash, an embroidered flower, and wampum belt. Each object reflects the diversity of First Nations, Métis and Inuit in North America. The iconic stone monument, the Inukshuk, is used as a marker identifying important sites and as a navigational tool to communicate direction. The eagle feather is significant to the spiritual beliefs of some Métis and First Nations peoples. Its symbolism includes honour, wisdom, and courage among many others. It is considered an honour to be given an eagle feather. The two drums include the Inuit drum and the Métis and First Nations drum. The drum is symbolic of the heartbeat of Mother Earth and is often played at various traditional gatherings and ceremonies. The embroidered flower is woven into many traditional garments and various objects through beadwork, painting, or etchings. It is also considered one of Canada’s first art forms. The Métis sash was once a tool of the voyageurs and fur traders. It is also a symbol of knowledge and the relationship between the Métis, the First Nations, and Europeans. At the top of the poster are four lines reminiscent of the traditional beaded wampum belt. There are many types of wampum belts with different significant meanings, including agreements made between two groups/nations, knowledge sharing, and storytelling. The four lines in this wampum belt represent the equality and diversity of the four peoples (First Nations, Metis, Inuit, and European settlers) and to acknowledge the journey of living together peacefully.

Nathalie Bertin—originally from Toronto, Ontario—is a multi-disciplinary artist whose style is often described as luminescent, energetic, bold, and colourful. She is also fond of strong shapes and textures. Nathalie blends her two cultures, Algonquin and French, into her artwork by incorporating various cultural and spiritual elements and concepts. “As an artist with European and First Nations roots, I am inspired by the art of my divergent cultures. My goal is to explore how my cultural connections and lifestyle interact with the natural environment that I live in and vice versa.” Find out more at www.nathaliebertin.com.