In 2013 the Ministry of Education asked independent researchers to examine the impact of Regulation 274 on school board hiring. The researchers’ report dispelled many myths about the regulation. 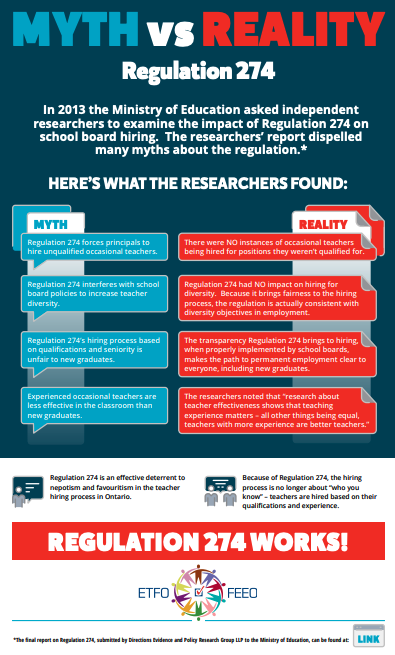 You can read the Ontario Regulation 274/12 - Hiring Practices here.

What is ETFO’s response to Ontario Regulation 274/12?

a) Following the interview to the LTO list, unsuccessful candidates who make the request shall be debriefed within thirty (30) days of the interview and recommendations shall be made to help enhance the professional growth that may lead to successful placement on the LTO list in the future.

b) The local parties may, if they choose, negotiate a capped roster.

c) A relocating permanent teacher who has been employed by a public school board in Ontario may apply to another board to be placed on the LTO list and shall be granted an interview.

d) Where an occasional teaching assignment extends beyond the number of LTO threshold days identified in the local collective agreement, the board may continue the occasional teacher in the assignment if the teacher is qualified and is on the LTO list, unless the local parties have mutually agreed otherwise.

i.  The job posting at the time the posting is circulated to the system;

ii. The  job/position title and the list of any applicants for the posting within three weekdays following the closing of the posting; and

iii. Names of the successful applicants.

The Final Report of the Hiring Practices – Regulation 274 Committee identified that the following considerations could be shared in order to address; the size of the LTO list, the number of interview cycles and the interview process:

a) District school boards continue to monitor the size of the LTO list to ensure that there is a sufficient number of teachers on the list to fill positions;

b) In circumstances where there are no qualified teachers on the LTO list and the board has met its obligations under Regulation 274, the board may post positions externally;

c) Interview cycles and timeframes for the LTO list should be regular and transparent;

d) Refreshing the LTO list, may require interviews to be scheduled more or less frequently to meet local staffing needs;

e) An evaluation tool for assessing candidate’s LTO list interviews will assist with a consistent process, particularly where there are multiple interview teams;

f) Where references from a principal/vice-principal are required as part of the interview for the LTO list, a process is needed so that obtaining references does not become a barrier for otherwise qualified applicants;

h) Open lines of communication between the district school board and the occasional teacher local are encouraged. As it has in the past, ETFO will take appropriate action if the terms of local collective agreements are violated.

What is ETFO’s response to those who attack the principle of seniority underlying Ontario Regulation 274/12?

As part of terms of ETFO’s Memorandum of Understanding (MOU) from the 2012 round of collective bargaining, the Ministry of Education retained independent researchers to investigate the implementation and impact of Ontario Regulation 274/12.

The report was published in November 2014 and indicated that Regulation 274, when implemented effectively by school boards, has resulted in a more consistent, transparent and fair hiring process for Ontario’s occasional teachers. The report also dispelled a number of inaccurate claims about the regulation.

For example, there are claims that using seniority negatively impacts the hiring process. We know, however, that under the Regulation occasional teachers may apply to be placed on the LTO list only if they have the required experience. Once on the LTO list, only teachers that have the required qualifications for the available position are interviewed.2 In the review conducted by Directions, not one instance was found where an occasional teacher was hired for a position they were not qualified for.

The principle of seniority is at the core of ensuring fairness in unionized workplaces. It provides workers some measure of control over their employer’s hiring decisions, which might otherwise be based on favouritism or discrimination. ETFO believes the role of seniority in the hiring process under the regulation is being unfairly targeted and believes that seniority is an important part of a establishing and maintaining a fair and transparent method of hiring teachers.